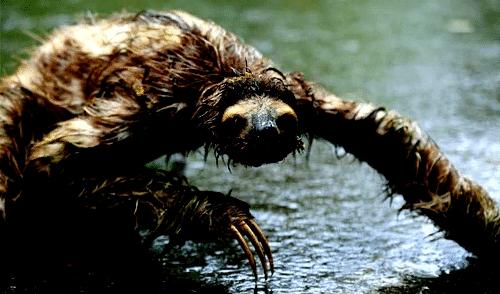 In my time here with Neon Anarchy, I’ve noticed that there’s a big gap in knowledge, and that’s paracritters. When it comes to dealing with the things, knowledge is key, since most (but not all) of the time, they’ll be stronger and faster than you, and if you don’t believe me then go hunt a blink sloth right now.

The name is Shrimp Shack, I own a restaurant in Bellevue, and I like to call myself a specialist in these matters. As a proud owner of Abrams lobsters, a Bandit, and having hunted many critters to make truly unique dishes, I come here to bring you the knowledge you need to not get gutted by a Hornbear. I’ll be tossing these little dossiers out at a reasonable rate, in hopes that it helps some of you out there, cause sometimes you can encounter some crazy drek out there.

I’ll start things off with possibly one of the deadliest Mutant Critters out there: The blink sloth. I’m sure you’ve all seen the silly trids of regular sloths. They’re slow, stupid, and live by not providing enough nutrition to be worth the hunt. Radiation can really change a beast though. At first glance, they look like an oversized sloth, and move like one too. Don’t be fooled; unlike their non-irradiated kin, these are carnivores, and have the skills to hunt. In the span of 3 seconds, they can run up to 48 meters, slash your throat, and carry you off to their den before anybody can react. If you’ve been shot by an assault rifle before, then you’ve been sliced by one of these bastards.

Thankfully, the radiation didn’t get rid of all of their weaknesses. For one, they don’t have a good sense of sight. Don’t move, don’t make a sound, and don’t give off too strong of a scent, and you might just be able to hide from this thing. If hiding isn’t an option, then you can also try and make yourself out to be higher up the food chain. Scare the thing off by shooting the fragger. Their natural armor is, thankfully, not as tough as some of our armored clothing, so it’ll hurt the thing if you can manage to land a shot. Even if you don’t kill it, it’ll get the message and run off. Finally, you can always offer up some other prey. These things will even eat Jaguars, so you should be able to find something suitable along the amazon river. They don’t get greedy and go for extra, so you can take the opportunity while it’s carrying its meal to either shoot it or run the hell away.

Remember, foks, at the end of the day, these monsters were born out of our own hubris. It was a Saeder-Krupp subsidiary by the name of Blankenvort Industrial who dumped radioactive waste in the Amazon river. This has caused a large breakout of mutations in the area, and that includes the (frankly, useless) three-toed sloth. I know we’re a bunch of career criminals, and we casually murder people like its nobodies business, but before I sign off, I implore you all to take a second to think twice before dumping some trash in the wild…

And make sure to start accepting runs against Blankenvort.